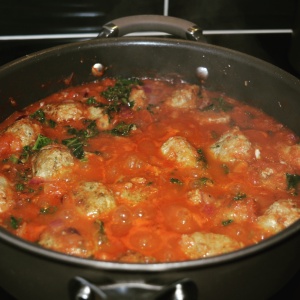 This is another Weight Watchers recipe. If I were to make it again, I would make a few tweaks. It would probably increase the propoints value of the recipe but I would switch out the ricotta for feta cheese. I found the meatballs to be a little lacking in flavour. I used breadcrumbs instead of rolled oats just because I had some leftover bread. I couldn’t find Cavolo Nero in the supermarket so I use kale instead, probably a bad idea as it didn’t really wilt down very well and was a bit hard. Next time I would just add some spinach instead close to the end of the cook until wilted. I did taste pretty good in the end but it would be even better with the suggested tweaks.

Salt and pepper to season

1. Blitz the oats in a food processor until finely chopped. Combine oats, mince, shallots, zucchini and ricotta in a bowl. Season well with salt and pepper.

2. Roll the mince mixture into balls. To prevent the balls sticking to your hand, you can spray them with some olive oil spray.

3. I cooked these in two batches to prevent them becoming soggy. Heat a frying pan and add some olive oil. Fry half of the mince balls until brown, turning frequently to coat all sides. Transfer to a plate. Do the same with the remainder of the balls. Re-add all the meatballs to the pan and reduce the heat. Add a lid and let the meatballs cook for 10 minutes. This is to ensure that the meatballs are cooked through on the inside. Remove from the heat.

4. Cook the pasta according to the packet instructions.

6. Serve the meatballs with the pasta and enjoy.