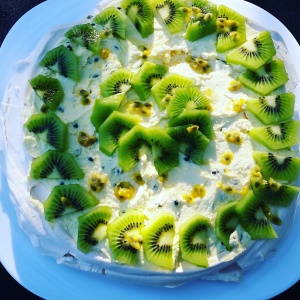 I’ve attempted making pavlova in the past with lots of failure. I found this recipe in the Taste magazine. It’s one of Matt Preston’s. His recipes are always straight forward and tasty so I thought I’d give it a try. It’s pretty fool proof. I’ve tried it twice now and it’s worked both times. I’ve altered the topping recipe but the base ingredients are the same. You can add whatever soft fruit you like. It’s best to make the pav the night before.

1 tsp vanilla extract (I used essence the first time around and it wasn’t very nice, so I’d go for the extract or leave it out)